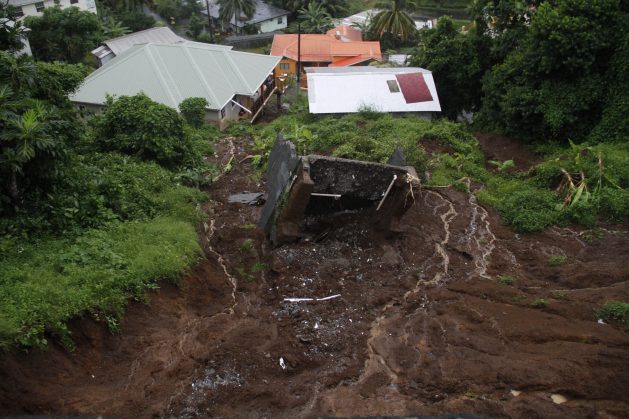 Extreme weather associated to climate change has resulted in million of dollars in loss and damage in St. Vincent and the Grenadines over the past few years. Credit: Kenton X. Chance/IPS

KINGSTOWN, Mar 4 2019 (IPS) – In the tiny eastern Caribbean nation of St. Vincent and the Grenadines, proverbs relating to the weather are very common.

Everyone knows that “Who has cocoa outside must look out for rain”, has nothing to do with the drying of the bean from which chocolate is made or the sudden downpours common in this tropical nation.

So when the government of St. Vincent and the Grenadines announced in 2018 that there was a need to put aside some money for “a rainy day” because of climate change, citizens knew that the expression was both figurative and literal.

In this country, highly dependent on tourism, visitors stay in hotel and other rented accommodation have to contribute 3 dollars per night to the climate change fund.

They join residents who had been contributing to the Climate Resilience Levy, for over one year, paying a one percent consumption charge. The funds go into the Contingency Fund.

As with many other small island developing states, St. Vincent and the Grenadines has had to struggle to finance mitigation and adaptation for climate change.

In the year since the Climate Resilience levy was established, 4.7 million dollars has been saved for the next “rainy day”.

The savings represents a minuscule portion of the scores of million of dollars in damage and loss wrought by climate change in this archipelagic nation over the last few years.

In just under six hours in 2013, a trough system left damage and loss amounting to 20 percent of the GDP and extreme rainfall has left millions of dollars in damage and loss almost annually since then.

The 4.7 million dollars in the climate fund is mere 18 percent of the 25 million dollars that lawmakers have budgeted for “environmental protection” in 2019, including climate change adaptation and mitigation.

However, it is a start and shows what poorer nations can do, locally, amidst the struggle to get developed nations to stand by their commitments to help finance climate change adaptation and mitigation.

“Never before in the history of independent St. Vincent and the Grenadines have we managed to explicitly set aside such resources for a rainy day,” Minister of Finance Camillo Gonsalves told lawmakers this month as he reported on the performance of the fund in its first year.

He said that in 2019, the contingency fund is expected to receive an additional 4.7 million dollars.

“While this number remains small in the face of the multi-billion potential of a major natural disaster, it is nonetheless significant. If we are blessed with continued good fortune, in the near term, the Contingency Fund will be a reliable, home-grown cushion against natural disasters,” Gonsalves told legislators.

He said the fund will also stand as an important signal to the international community that St. Vincent and the Grenadines is committed to playing a leading role in its own disaster preparation and recovery.

Dr. Reynold Murray, a Vincentian environmentalist, welcomes the initiative, but has some reservations.

“I am worried about levies because very often, the monies generally get collected and go into sources that don’t reach where it is supposed to go,” he told IPS.

“That’s why I am more for the idea of the funding being in the project itself, whatever the initiative is, that that initiative addresses the climate issues.

“For example, if you are building a road, there should be the climate adaption monies in that project so that people build proper drains, that they look at the slope stabilisation, that they look at run off and all that; not just pave the road surface. That’s a waste of time, because the water is going to come the next storm and wash it away.”

Murray told IPS he believes climate change adaptation and mitigation would be best addressed if the international community stands by its expressed commitments to the developing world.

“My honest opinion is that a lot of that financing has to come from the developed countries that are the real contributors to the greenhouse problem,” he told IPS.

“That is not to say that the countries themselves have no obligation. We have to protect ourselves. So there must be a programme at the national level, where funds are somehow channelled into addressing adaptation and mitigation. The mitigation is more with the large, industrialised countries, but small countries like us, especially the Windward Islands, mitigation is our big issues…”

St. Vincent and the Grenadines is making small strides as a time when the finance minister said the 437 million dollar budget that lawmakers approved for 2019 and the nation’s long-term developmental plans, must squarely confront the reality of climate change.

“This involves recovery and rehabilitation of damaged infrastructure, investing in resilience and adaptation, setting aside resources to prepare for natural disasters, adopting renewable energy and clean energy technologies, and strengthening our laws and practices related to environmental protection,” the finance minister said.